I have made an easy-to-use Excel spreadsheet that can simulate data according to a latent structure that you specify. You do not need to know anything about R but you’ll need to install it. RStudio is not necessary but it makes life easier. In this video tutorial, I explain how to use the spreadsheet.

This project is still “in beta” so there may still be errors in it. If you find any, let me know.

If you need something with more features and is further along in its development cycle, consider simulating data with the R package simsem.

A new study by MacCann, Joseph, Newman, and Roberts (2013) about the place of emotional intelligence in CHC Theory is worth reading. I highlight some of its findings and discuss other matters in this video:

Conditional normal distributions are really useful in psychological assessment. We can use them to answer questions like:

What follows might be mathematically daunting. Just let it wash over you if it becomes confusing. At the end, there is a video in which I will show how to use a spreadsheet that will do all the calculations.

Suppose that variable Y represents reading comprehension test scores. Here is a fancy way of saying Y is normally distributed with a mean of 100 and a standard deviation of 15:

In this notation, “~” means is distributed as, and N means normally distributed with a particular mean (μ) and variance (σ2).

The 95% confidence interval around this guess is :

Now, suppose that we know one thing about the person: the person’s score on a vocabulary test. We can let X represent the vocabulary score and its distribution is the same as that of Y:

where ρXY is the correlation between X and Y.

You might recognize that this is a linear regression formula and that:

where “Y-hat” (Ŷ) is the predicted value of Y when X is known.

Let’s assume that the relationship between X and Y is bivariate normal like in the image at the top of the post:

The first term in the parentheses is the vector of means and the second term (the square matrix in the brackets) is the covariance matrix of X and Y. It is not necessary to understand the notation. The main point is that X and Y are both normal, they have a linear relationship, and the conditional variance of Y at any value of X is the same.

The conditional standard deviation of Y at any particular value of X is:

So, putting all this together, we can answer our question:

How unusual is it for someone with a vocabulary score of 120 to have a score of 90 or lower on reading comprehension?

The expected value of Y (Ŷ) is:

Suppose that the correlation is 0.5. Therefore,

This means that among all the people with a vocabulary score of 120, the average is 110 on reading comprehension. Now, how far off from that is 90?

What is the standard error of the estimate?

Using the standard normal cumulative distribution function (Φ) gives us the proportion of people scoring 90 or less on reading comprehension (given a vocabulary score of 120).

In Microsoft Excel, the standard normal cumulative distribution function is NORMSDIST. Thus, entering this into any cell will give the answer: 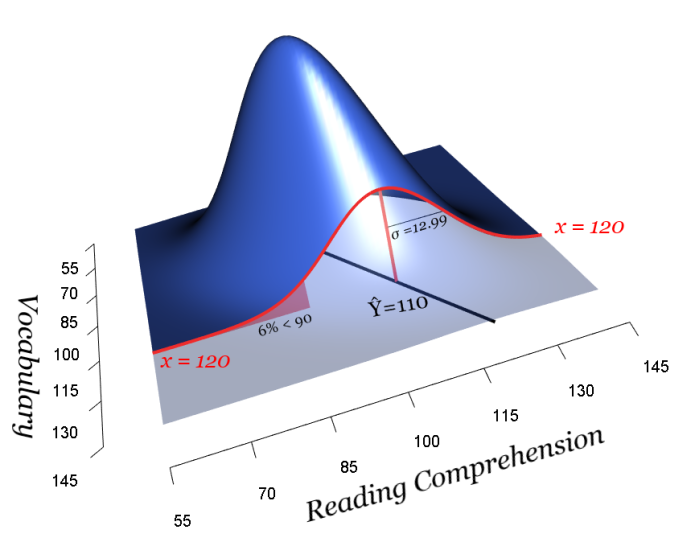 What proportion of people score 90 or less on reading comprehension if their vocabulary is 120 but their working memory capacity is 80?

The validity coefficients are the correlations of Y with both predictors (RXY):

The standardized regression coefficients (β) are:

However, in this case all the variables have the same metric and thus the unstandardized and standardized coefficients are the same.

The vector of predictor means (μX) is used to calculate the intercept (b0):

The predicted score when vocabulary is 120 and working memory capacity is 80 is:

The multiple R2 is calculated with the standardized regression coefficients and the validity coefficients.

The standard error of the estimate is thus:

The proportion of people with vocabulary = 120 and working memory capacity = 80 who score 90 or less is:

Here is a spreadsheet that automates these calculations.

I explain how to use this spreadsheet in this YouTube video:

I’ve been trying to make teaching multiple regression a little easier so I began playing around with the rgl package in R. Lots of fun!

How to estimate latent scores in individuals when there is a known structural model:

I wrote a commentary in a special issue of the Journal Psychoeducational Assessment. My article proposes a new way to interpret cognitive profiles. The basic idea is to use the best available latent variable model of the tests and then estimate an individual’s latent scores (with confidence intervals around those estimates). I have made two spreadsheets available, one for the WISC-IV and one for the WAIS-IV.

Five-Factor Model of the WISC-IV

Four-Factor Model of the WAIS-IV

I decided not to provide a spreadsheet for the five-factor model of the WAIS-IV because Gf and g were so highly correlated in that model that it would be nearly impossible to distinguish between Gf and g in individuals. You can think of Gf and g as nearly synonymous (at the latent level).

Schneider, W. J. (2013). What if we took our models seriously? Estimating latent scores in individuals. Journal of Psychoeducational Assessment, 31, 186–201.

In this tutorial I discuss and present visual representations of covariance. Although covariance is not directly informative, it is a fundamental ingredient in almost all of the most frequently used statistical procedures.

Here is my Excel spreadsheet that converts any type of standard score to any other type.

In this video tutorial, I show why the typical description of kurtosis is not quite right and, in some cases, quite wrong.

A video tutorial in which I explain what skewness is, how it arises, and various ways it can be conceptualized.